Mirzapur, a quaint city in eastern Uttar Pradesh, is yet to feature on top destinations of India list, but the mountain-rimmed city is soon catching up as a perfect low-budget weekend getaway. The virgin landscapes of Mirzapur aren’t its only asset. The historical ruins contributed by 5000-year-old Palaeolithic culture, Mughal predominance and British autocracy are a thing of wonder. 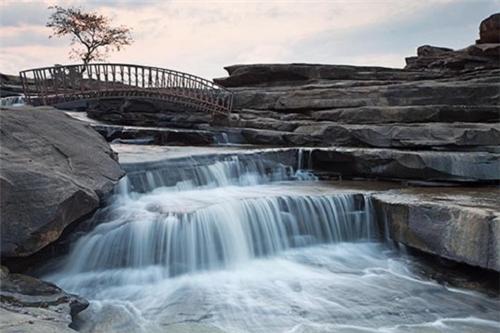 If you are in a mood to spend your short-vacation marooned and in the midst of nature, Mirzapur is worth a stop. Admittedly, there is nothing much to see around, except Mother Earth’s beauty and laze the day away listening to the unceasing cadence of cascades. Also, don’t miss out on the carpets and brassware, the modern Mirzapur is known for.

Mirzapur is backed by rich and colourful history that can be traced to 5000 BCE. Evidences of Palaeolithic culture, ancient rocks and paintings of 17000 BCE lay scattered all over this congested district. Historians take deep interest in studying the ruins and pictorial descriptions of horses, people, chariots, weapons and fascinating petroglyphs in sandstone found in Vindhya ranges of Mirzapur. On the forested area, just outside the city named Lekhania Dari, a number of ancient paintings can be found.

As per the carved stones in Naar Ghat, Mirzapur was a commercial city during Ashokan period. Rates of toll taxes etched on stones have been discovered in Mirzapur district that goes back to Mauryan dynasty (269BCE – 232BCE).

Adjacent to Mirzapur’s Kachhawa Bazaar, there is a temple of Lord Shiva that is believed to belong to Treta Yug or Ramavavatar age. The temple, now under the surveillance of Archaeological Survey of India, has carvings and inscriptions quite similar to that of Khajuraho temple.

Sheikh Mirza, the indigenous ruler of Mirzapur was taken into custody by the British and thereafter, the name Mirzapur was assigned after the ruler’s name. It was the British, who took the task of remodelling the city. It is for this reason, a large section of the city roads and areas have been named after its creator such as Wellesley Ganj after Lord Wellesley, Windham Waterfall after Mr. Windham, Dankeen Ganj after Mr. Danseen and Mukeri Bazaar after Lord Mercury. The elegant Municipal Corporation building in Mirzapur is also a work of art by the British.

The locals commonly believe that Mirzapur was initially known as Girijapur and was founded by Raja Nanner. There are others who believe that the city was addressed as Gangayatan Ghat. Some of the earliest writings on the city can be found in Tieffenthaler’s writings in 1760. Jonathan Duncan’s records on Varanasi also mention Mirzapur on several occasions.

Mirzapur is surrounded by natural beauty and is located at a distance of about 60 km both from Varanasi and Allahabad. The city is also equidistant (650km) from Delhi and Kolkata. It has an average elevation of 265 feet or 80 meters from sea level. As per Central Statistical Organisation, Mirzapur district has an area of 4521 sq.km. 2001 Census records a population of over 1 million. South of Mirzapur is Sonbhadra district, on its north-west is Allahabad district. Sandstone, red sand and ordinary sand are found aplenty in Mirzapur. Trees like mahua, neem, saal, teak, mango and guava are commonly found throughout the district.

Just like entire northern India, Mirzapur too experiences extreme summers and winters. The summers witness temperatures as high as 48°C and winters as low as 7°C. The average rainfall in the region is over 1100 m. Rainfall occurs mostly during June to September.

Mirzapur is not a happening tourist spot of India, but its demand is gradually growing among short-trip holiday seekers. Mirzapur and its surrounding areas are mostly known for scenic picnic spots, ideally located in forests and adjacent to waterfalls and dams. There are a number of temples and ghats in the district that attracts tourists from nearby areas.

Shopping and Food in Mirzapur

Mirzapur is not the ideal place to shop and shopping options are extremely limited. However, if you are keen in buying carpets and different types of brassware, this small town might prove useful.

There are not many posh restaurants and hotels in the area and you have to rely on the local eateries for food. Food option is mostly restricted to Indian cuisine with few hotels serving continental and American breakfast.

Click Here to Read More on Shopping in Mirzapur

Kajari Mahotsav is the biggest of all festivals held in Mirzapur. Deep Mahhotsav, Jhulan Utsav, Chhat Puja are some other festivals held with utmost gaiety and aplomb throughout the district. Mirzapur is also known for its grand fairs – Lohandi Mela, Ojhala Mela, Kantit Mela are some of the popular ones.

How to Reach Mirzapur

Mirzapur can be best reached through trains and buses. The city houses a big bus depot from where buses to all major nearby cities are available. The railway station also has a good connectivity to other big railways stations of the state. Important trains like Kalka Mail, Chambal Express, Bagmati Express, Kolkata Mail, Puri Express, Purushottam Express, Shipra Express and Magadh Express pass through this destination.

There are no direct flights to Mirzapur. The nearest airport to the city is Lal Bahadur Shastri Airport also known as Varanasi Airport.